We Accept PayPal and all Major Credit Cards

If you have a FPE (Federal Pacific Electric) Breaker Panel in your home please CLICK HERE and investigate the over-looked danger your home and family is facing. 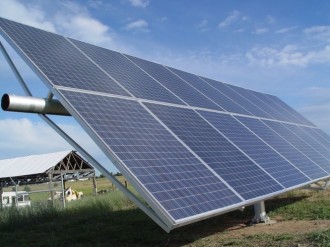 When most people picture solar-powered homes, they picture cabins in the woods, completely off the grid. They think of big, ugly panels on roofs, and frugal electrical consumption—no big screen TV’s or multiple refrigerators. However, that’s not an accurate picture of today’s solar capabilities. Today, you can be completely off the grid—in a subdivision.

Today, many new homes are being built with a solar array on the roof that’s less obvious than those enormous panels of the past. Today’s solar panels can convert more energy with less space, making them smaller and more unobtrusive. A solar array on a roof will still show up, but it will blend in more with the shingles.

That old off-the-grid stereotype isn’t quite what it’s like nowadays. Today’s solar powered homes are often hooked up to traditional utilities as well. By using a combination of traditional energy and solar energy, these homeowners are able to significantly cut their electricity costs—without sacrificing in terms of usage. It’s possible for homeowners to produce enough solar energy to actually sell energy to utility companies, instead of getting a bill.

Installing a solar array on your roof is not as expensive as many expect it to be. 15 states now use money from “public benefit funds” to help subsidize renewable energy programs, and 24 states offer significant rebates to people who install solar panels on their roofs. In New Jersey and New York, the rebate program compensates homeowners for up to 70% of installation costs.

If you’re considering installing solar panels, here are a few basics you’ll need to know before making your decision.

How do solar panels work?

Solar panels, also called photovoltaic systems, or “PV,” work by converting sunlight into electric energy. Each PV panel is composed of a group of solar cells made of a semiconductive material, often crystalline silicon, which absorbs light with great efficiency. Panels are constructed in layers. Most panels have a clear protective layer at the top, a few layers of conductive cells, and a bottom layer of polymer backing.

How effective are solar panels?

Solar panel systems can produce enough electricity under ideal conditions to power the lights and electrical appliances in a typical American home, as well as keep it hot or cool. However, how effective your solar panels are depends on your location. Solar panels are installed on whichever side of your house gets the most solar exposure—in southern climates this is the north-facing side, and in northern climates it’s the south-facing side.

However, if your home does not get an average of six hours of steady sunlight year-round, you won’t see as much energy. In addition, the sun is stronger in some areas than in others. A home in Vermont, for example, will need more solar panels to produce energy than a home in Nevada or Arizona.

What happens if my home doesn’t get a lot of sunlight?

Most modern solar-panel homes are not completely off-grid. Many homes use both solar panels and traditional utilities. While this doesn’t cut your dependence on fossil fuels completely, it does make it possible to conserve energy while continuing to use all the appliances you’re used to.

Solar panels are a great way to conserve energy and resources. However, they shouldn’t be expected to solve all your energy problems on their own. For best results, do all you can to make sure your home is energy-efficient in other ways as well—by installing Energy Star appliances, efficient lightbulbs, and efficient cooling and heating systems. This will ensure your home is not only efficient, but eco-friendly.