We Accept PayPal and all Major Credit Cards

If you have a FPE (Federal Pacific Electric) Breaker Panel in your home please CLICK HERE and investigate the over-looked danger your home and family is facing.

For our $295.00 flat fee you are provided with a whole house surge protection (suppression) device rated for your particular circuit breaker panel installed by a qualified technician and a full inspection of your homes main electrical breaker panel.

A work order or invoice verifying the date, confirmation of the breaker panel inspection, and that a licensed electrical contractor installed the device.

This work order will maintain the manufactures warrantee of up to $25,000 on connected equipment. (see Warranty Disclosure and Claims Process below) Most devices warrantees are voided if a licensed electrician does not install them.

Note: If you do not have any open spaces (room for additional breakers) in your panel you may require tandem breakers to create space and there will be an additional charge of 45.00 per tandem breaker. 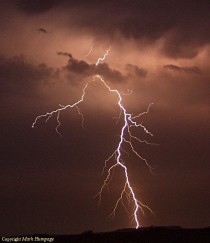 A power surge happens in milliseconds—a thousandth of the time it takes you to blink your eyes. Maybe you see the lights flicker, or your computer locks up for no apparent reason. Maybe you don’t notice anything at all.

But that little spike in the current flowing through the wires of your house can have big consequences. The Insurance Information Institute includes insurance claims from power surges in the same category as damage from lightning strikes. Together they resulted in more than $1 billion in insured losses in 2008, with an average claim of $4,329. There’s an easy and affordable way to steer clear of those kinds of losses. They’re called whole-house surge protectors, and here’s how they work.

Most people worry about a power surge being caused by something outside of the house, like a lightning strike or a downed power line. While lightning is the most dangerous cause of surges, it’s far from the most common. According to the NEMA Surge Protection Institute, 60% to 80% of power surges start inside the home, typically from major appliances and systems that cycle on and off, such as air conditioners, refrigerators, and clothes dryers.

Over time, those fluctuations take a cumulative toll on sensitive electronics, such as plasma TVs, computer equipment, microwaves, and smart appliances, causing delicate circuits to malfunction or burn out prematurely.

Since power surges don’t present a fire hazard, protective devices aren’t required by building codes or homeowner’s insurance carriers. But everyone from the National Fire Protection Association to the Institute for Business and Home Safety recommends them.

The good news is that protection is readily available, and even the top-of-the-line solutions are affordable. The gold standard is a  whole-house surge protective device installed at the circuit breaker box or main point of power entry to the home.

A whole-house SPD can protect against up to 75,000 amps of current flowing into your home from the outside; normal household power is 100 to 300 amps. When a sudden surge occurs, such as from a lightning strike or damage to a power line, the device detects the excess current and safely diverts it through the house’s grounding path.

Although most primary surge protectors are rated to protect against lightening, direct lightening strikes are not covered under the warranty.

The warranty covers utility surges and surges from with-in the home.

2. Contact the maufacturer﻿  to get RMA# w/ letter to return defective surge protector for inspection and return the device.

- Where and when the surge protector was purchased. (Pendl Electric, llc)

- When it was installed. (Dated on work order/invoice)

- Details of the surge event.

- Any information on damamged equipment and repair invoices

- Letter from Pendl Electric, llc that the surge protector did in fact fail.